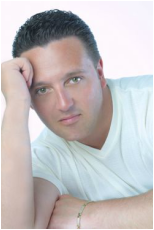 For the past two decades psychic medium John Edward has assisted thousands of individuals in predicting the future and communicating with those who have passed. An author and lecturer, he has been a significant contributor to the world of psychic phenomena, and his approachable demeanor has gained him loyal followers. John Edward hosts two internationally syndicated shows, Crossing Over with John Edward and John Edward Cross Country, where he utilizes his psychic abilities to connect people with loved ones on the “other side.” One of the country’s leading psychic mediums and experts, John Edward has been featured on numerous media outlets. Participating in several international tours, he has been a guest on CNN’s Larry King Live, The Oprah Winfrey Show, and The Today Show. Regularly invited to participate on top-rated morning radio shows, John Edward has been featured on Los Angeles’ KROQ and New York’s WPLJ.

Additionally, he has made television appearances on Dateline, ABC’s 20/20, Jimmy Kimmel Live, Entertainment Tonight, Live with Regis & Kelly, and many other shows. Earning recognition for his unique abilities and skill, he has also been featured in articles published in The Washington Post, Los Angeles Times, The New York Times, People, Associated Press, and Entertainment Weekly. Currently holding a tour across the United States, John Edward will be touring internationally in Ireland and Canada in 2012. The events include a meet and greet where he answers questions from the audience and conducts readings.

​Mr. Edward is available for private readings and small intimate groups as well. Private readings are held for up to four people in a session, where all individuals participating are related or desiring to connect with the same family member. Small group events are comprised of 100 people or less and are scheduled for two hours in length. People interested in meeting with more mediums for a truly unique and interactive experience can look to book or reserve a spot in one of John Edward and Friends Intimate Events. He also conducts live group events, seminars, and private reading groups, which are limited to 15 people per session. To learn more about the events and readings,
visit JohnEdward.net.
John Edward, Amazon
John Edward | Huffington Post
John Edward ~ IMDB
John Edward at TV Guide
Powered by